This edition of our S404 spare parts catalog is fourth in a series.  With humble beginnings prior to the availability of the internet to the masses, our hardcopy Catalog Nr. 1 that appeared in 1980 was an attempt to provide the knowledge we had at the time to the consumer for the identification of parts for the Unimog S404 without infringement of the Mercedes copyright. Our Catalogs therefore are based on the German army’s Technische Dienstvorschriften (TDv or technical service publication) and this Catalog Nr. 4 basically follows the format of the 1967 edition. We’ve made some modifications based on what we’ve seen in circulation over the past 30+ years, including winches, Schwingfeuer heaters, and other such items not found in the copyrighted Mercedes factory printed parts lists.   At least one subsequent version of the basic TDv was issued by the German armed forces, dated 1979, which we have acquired over the years in microfiche form.

While the military catalog focused on purely the “issue” vehicles in the army’s livery, we have attempted to include those items frequently encountered as a result of vehicles transitioning from military to civil and private service.  Examples would include hazard flasher modifications and ignition coils.  The German road laws did not include the hazard flasher requirement on vehicles when the S404 was originally produced.  Thereafter, no less than three different configurations have been noted in vehicles we have encountered over the years in addition to at least two “official” military conversion arrangements seen since 1970. Sourcing these items has become a challenge, with information becoming difficult to come by, and dated.  Many of these items are simply no longer available, and as a result, a replacement of functional similarity has taken its place.  Ignition coils of the conventional commercial style, produced by BOSCH are expensive and rare.  We now offer a German made replacement of like quality.   More on the topic of replacement parts is explained in the "Parts Condition" section.

How to read this Catalog

The following table facilitates the interpretation of this catalog: 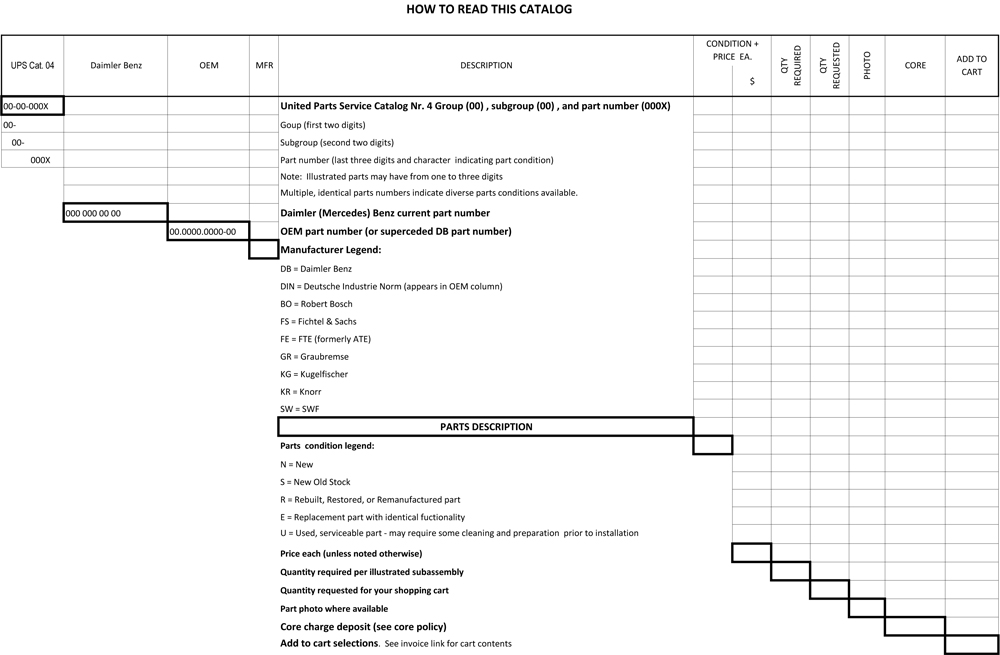 This table is valid for the first 20 groups.  Thereafter, SPECIALS  (GROUP 21) and Literature (GROUP 23) are rather straight forward, with most items being identified with standard Mercedes parts numbers.  Please procede to Catalog Nr. 4 for a complete table of contents.  At present, GROUPS 16 and 22 are under construction.  GROUPS 17 and 18 are reserved for future entries.  Enjoy your visit !